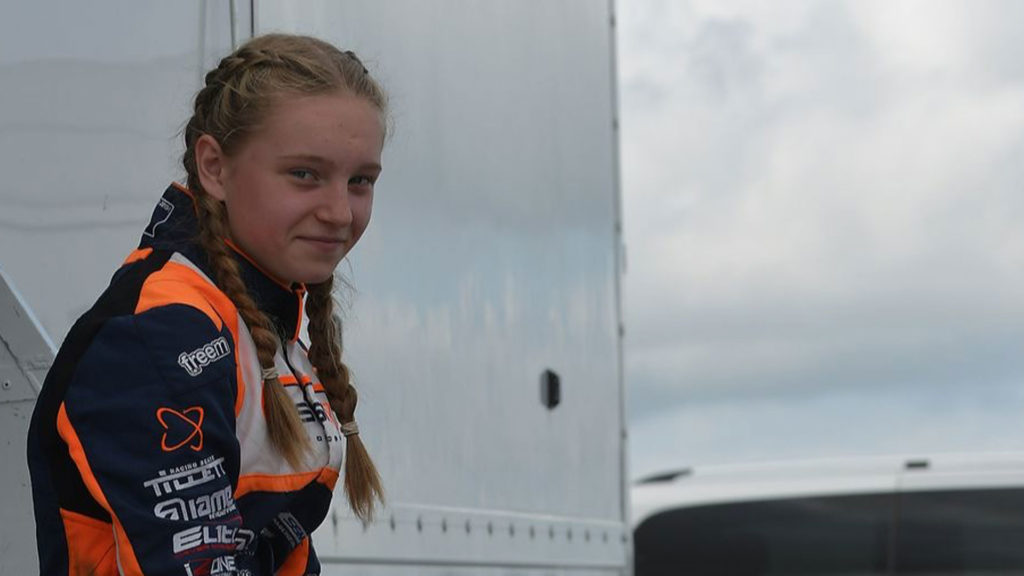 Greenlight Sports Management is delighted to announce that rising teenage karting star Jessica Edgar has joined its roster of drivers. Part of a motorsport family that has spent more than half a century in the industry, the youngster has an impressive resume behind her, despite being just 16 years of age.

Jessica has represented the United Kingdom at the FIA Motorsport Games, is a member of FIA Girls on Track, is part of Motorsport UK’s Academy, and has twice been selected for The Girls on Track – Rising Stars programme, a joint project between the FIA and Ferrari’s Driver Academy, which aims to identify the best 12–16-year-old female racers from across the globe.

She is the tenth member of the Edgar family to be involved in karting, going right back to her great grandfather, Iredale, part of a team of enthusiastic racers who purchased a disused quarry which is now home to Rowrah, one of Britain’s finest kart circuits. Her grandparents, father, and uncle claimed multiple karting championship titles, while her cousin, Jonny, was the 2020 ADAC Formula 4 Championship victor and currently races in the FIA Formula 3 Championship.

Jessica first tried karting when she was four years old, before coming into her own when she was 13, competing in X30 Minis, where she took fifth position in the LGM Championships. Her performances that season meant she was asked to represent Team UK in the inaugural FIA Motorsport Games in Italy, as well as being accepted into Motorsport UK’s Academy for 2020 and ’21 and has been part of The Girls on Track – Rising Stars programme for the past two seasons, heading to the prestigious Winfieid Racing School at Paul Ricard.

Uniquely equipped to provide world-class support for its clients, Greenlight Sports Management was founded by veteran racer and Le Mans winner Guy Smith and racing driver and BRDC SuperStars Director Andy Meyrick. Jessica joins Ben Barnicoat, Charlie Robertson, Seb Morris, and Josh Skelton at Greenlight, with all the team eagerly looking forward to working with her as she aims to make her way into Formula 4 competition, with a long-term goal of reaching the W Series.

“My best friend’s brother is Josh Skelton who is with Greenlight, so that’s how we were recommended to speak to Andy and Guy. After meeting with them and understanding what they do for their drivers in the business, we thought it would be a good opportunity to join, knowing that they’ll be able to help me build a career in motorsport and focus on my racing.

“Being part of FIA Girls on Track has made me realise how good I am. I learned a lot of other skills rather than just driving, like interview techniques and how the cars and tyres work. It was interesting to take part in the Rising Stars scheme, to see how fundamental your fitness is, plus it was a good experience to drive an F4 car as that is my short-term goal.

“I can’t wait to begin working with Guy and Andy, because they know what they’re doing with all of their experience in motorsport. I am confident they will be able to give me advice and help me all the way through my career.”

“We are really happy to welcome Jessica to Greenlight Sports Management. She is a really promising talent and successful in karting but is now ready to make the step forwards into car racing. Her experience with FIA Girls on Track has not only been a good experience for her but means she has tasted Formula 4 machinery already.

“Her longer-term goal is to reach the W Series so we will be doing what we can to help prepare her for that step and guide her through the next stages of her career. She has good options for 2022 which we will evaluate with her and help ensure she makes the right choices to have the very best chance of success.”