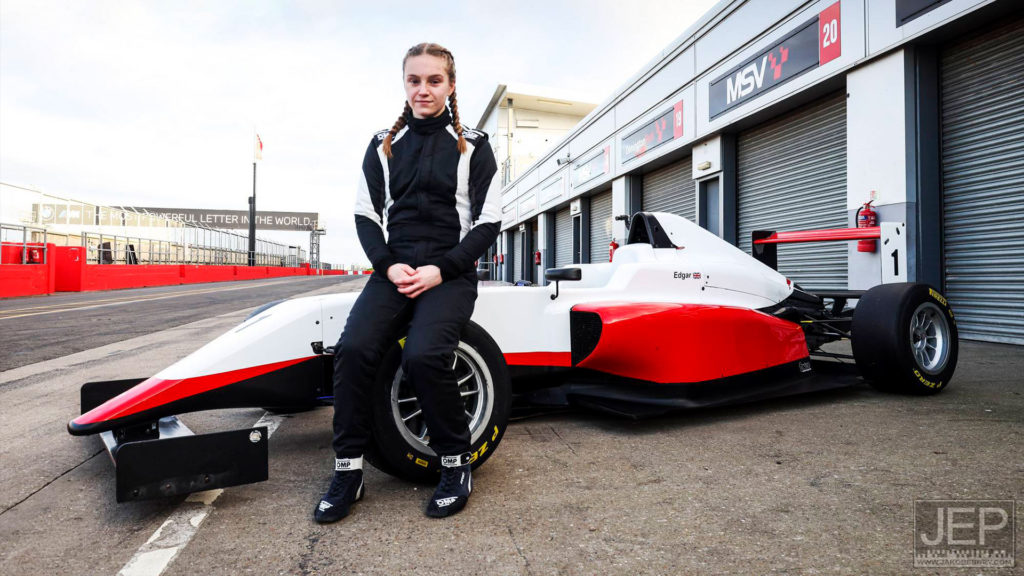 Greenlight Sports Management (GSM) are delighted to announce that Fortec Motorsport has confirmed Jessica Edgar as the team’s first driver for the new GB4 Championship partnered by the BRDC.

The GSM young driver from Ennerdale in Cumbria has enjoyed several test days with the team in recent weeks, and the new season will mark her first campaign in car racing following a successful karting career.

Jessica began karting in 2010, and highlights soon followed, including being crowned as the Rowrah Club Champion in 2017, wins in the Super One category on the way to fourth overall in the final standings of the Mini X30 division and fifth in the same class in the Little Green Man (LGM) Championship in 2018.

Edgar broke records in 2019 after becoming the first female to win more than one round of the LGM Championship on the way to second overall in the final standings, the highest end of year finish for a female karter. She also secured the runner-up spot in the Kartmasters Grand Prix, just one-hundredth of a second away from being the first female to win a GP title, with her performance earning a place at the X30 World Finals at Le Mans. Jessica was also fourth in the British Kart Championship as she continued in the X30 Mini division.

She was also chosen to represent Team UK in the FIA Motorsport Games in 2019 and was chosen as a member of the Motorsport UK Academy, and was selected for the FIA’s ‘Girls on Track Rising Stars’ programme in 2020.

2021 saw Edgar finish fourth overall in the LGM Series while competing in the British Kart Championships.

Jessica is the tenth member of her family to establish a career in motorsport, following
three generations of the family preceding her, including her Great Grandfather Iredale Edgar, her grandparents Terry and Winnie Edgar, and father Jason (a top motocross rider before switching to karts) and her uncle Justin.

GSM Director Guy Smith said: “We are pleased to see Jess join Fortec Motorsport for the GB4 Championship, which promises to be a very competitive and exciting championship.

I know Fortec well, having driven for them many years ago in Formula 3, and I know that it will be a supportive environment for Jess’s first car racing season. During testing, Jess has shown that she is ready for the challenge and has been improving each time out.

It would be great to see her challenging for the podium later in the season.”

Jessica Edgar said: “I am excited to be racing in the GB4 Championship and enjoy working with the Fortec team. I’m looking forward to the year ahead; they are a great team and have lots of experience helping young drivers progress from karting to car racing. I know I have a big learning curve ahead of me, but I want to maximise every opportunity I get. Guy and Andy at GSM have helped hugely in putting everything together to allow me every chance to succeed.”